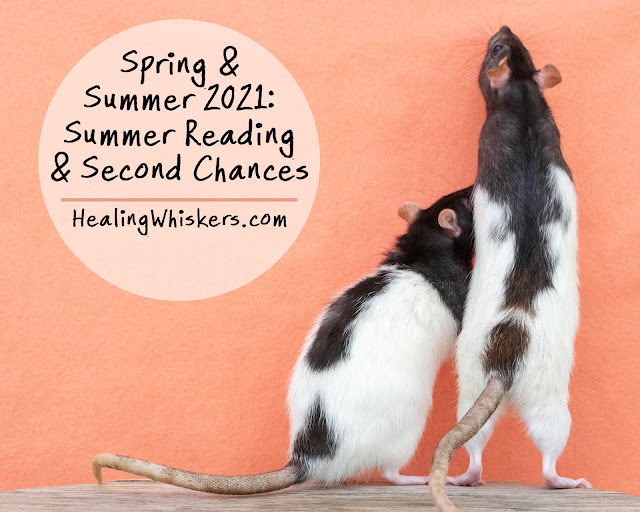 With 2020 behind us, let's get into 2021. As always, thank you to those who follow us on social media: Facebook, Twitter, Instagram, Tumblr. I started working full-time in 2021 so I wasn't able to do much in the early months, but let's see what we have accomplished so far... 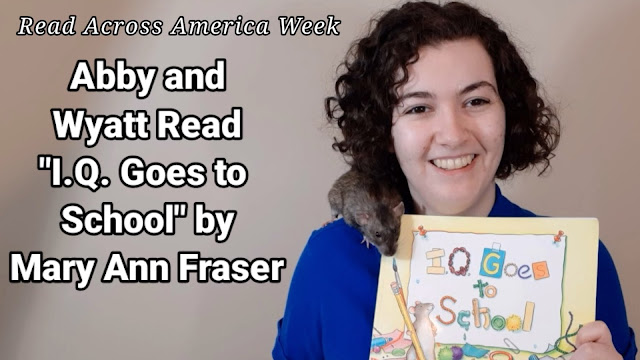 In February, I was asked by my friends at the Cedartown Library if I could make some videos for the Sara Hightower Regional Library System. This spans Cedartown, Rome-Floyd, Rockmart, Chattooga, Trion, and Cave Spring Libraries. This was a read-along video featuring me and Wyatt reading a book called I.Q. Goes to School which is actually a book that was donated for our Reading Rats program. I had a comment from a speech pathologist who actually used this video with her students and I am just flabbergasted. You can see her comment on Facebook here. 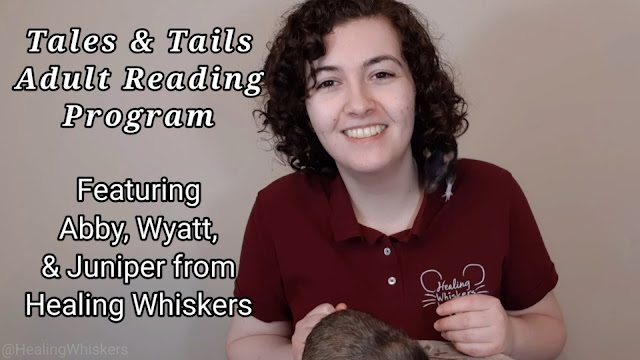 Our second library video that was posted in March, was for the Tails and Tales Adult Reading Program. In this one, we talk about therapy rats and what they do, talk about some of my favorite moments, look at some footage, and talk about rat tails. 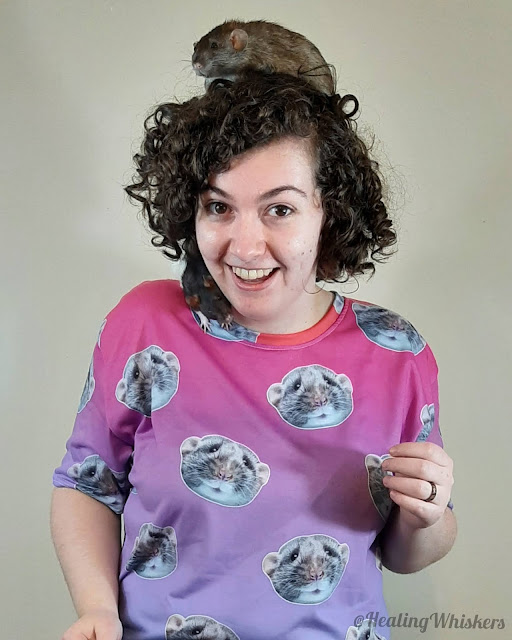 We did a little collab with Pop Your Pup and have our own 10% off affiliate code for our readers: HEALINGWHISKERSPOP10. They have a lot of cute merchandise that you can customize with your pet's face. It took me FOREVER to find the right photo of Vincent for my shirt and they were so very patient with me. I highly recommend them! Check them out here.

One evening in April, Johnny says to me "I think Juniper needs a friend". We had been thinking about the inevitable as Wyatt was getting older and whenever that time comes Juniper would be by herself. I thought "Hm, maybe. but I think I would prefer a rescue or a retired breeder so that we can get the age similar." A day passed and I was browsing my Facebook and I came across this post from Second Chance Heroes. A year-old female black hooded rat with a missing eye just like Juniper?! The timing was insane. Unfortunately, SCH is located in Richmond, Virginia which is over 500 miles away.

I commented on the post asking if they did any kind of transport because Coral would be a perfect fit. I got a message from them saying they would ask around and see if anyone could meet halfway. The next day I got a message that someone could meet halfway, and then the next day someone offered to go all the way to Atlanta, and then the next day we had an offer to deliver her to our house! I want to give a big shoutout to RSJ Transport who brought her to us from Second Chance Heroes! This was their first rat transport and they had a lot of fun.
Coral was very scared when she got here though and it makes sense. SCH told me that Coral was a rejected feeder rat who was given to a family with kids as a pet. They kept her in a teeny tiny critter trail hamster cage with a small igloo and became scared of her as she got bigger and even nick-named her "scare". So going from that to a critter nation was a big change. 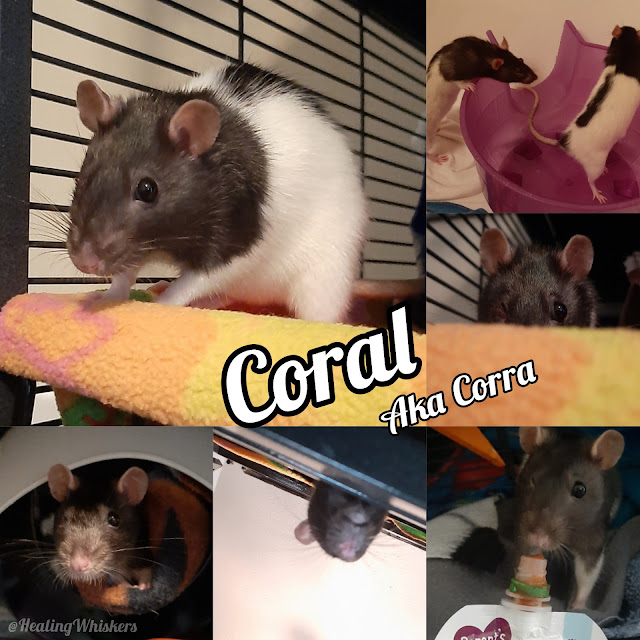 I started to gain her trust with baby food and snacks, but I have been bitten in the process if I push too far into her comfort zone. I either call her Coral or Miss Corra. I kept flip-flopping in the beginning so I decided to just do both and make Coral her full name, haha. She is really interesting as she doesn't want to be touched in the cage, but if you manage to catch her she will huff and puff but relaxes for a bit while you pet her. She and Juniper really enjoy each other and I'm so glad we adopted her! 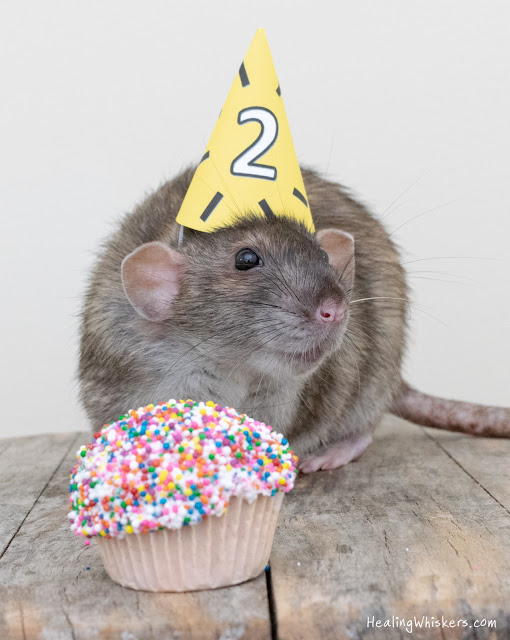 Late May, Wyatt passed on us. From our social media:
"Wyatt

April 2019 - May 2021
It saddens me to say, but Friday evening Wyatt decided to go over the Rainbow Bridge to be with his brothers...
(Trigger Warning)
Late last month we did this fun photoshoot for his 2nd birthday and I finally got around to editing it. In the last two weeks, Wyatt quickly developed respiratory issues, and even though we were on top of it and caught it early, it escalated fast.
We went to the vet last Tuesday and I had a sinking feeling that we were getting close to the end. He had started sucking in his sides and his energy was lower than usual. He didn't want to exercise, ate slowly, and stayed in the hides all day. We got some pain meds and antibiotics which Wyatt did not want to take. He was the worst at taking medicine, but him getting stressed out made him breathe harder which turned into gasping.
It would stop after a while, but Friday I came home from work, and Johnny had gotten the nebulizer out and tried everything. Wyatt was gasping and in general freaked out. The nebulizer helped a bit, but we decided we needed to go to an emergency vet since our regular vet wasn't available and he was struggling.
We start to get ready and I go to put Wyatt in the carrier. He tried to crawl back into my arms and he stopped gasping after some rapid tail twitching. I was speechless. Johnny and I sat on the floor sobbing and holding our little man as he left us.
He decided to leave on his own time. I'm still flabbergasted at the timing. I'm just glad he isn't in pain anymore and that he can run along with his brothers

."
I think what really got me was the timing. Literally, as I was going to put him in the carrier he had that stroke or seizure which ended his life. This was also my last day at the pet store job so it was just a crazy day of feels in general. I've only had one other rat who left naturally and that was Oliver and he also had strange timing. He passed within an hour of his euthanasia appointment with Jasper. It's insane how things end up. 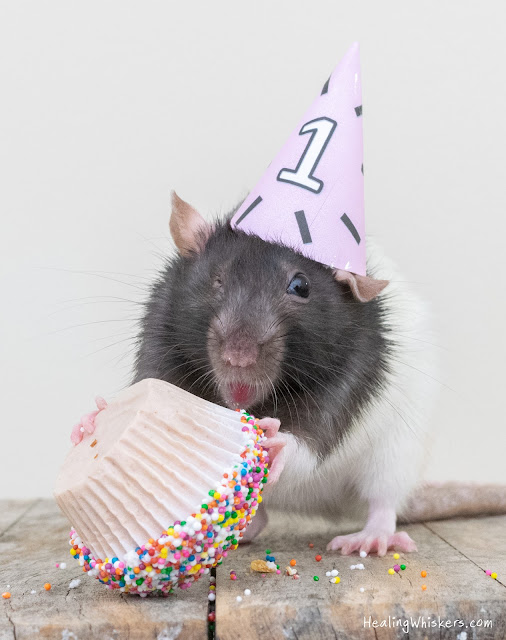 In mid-June, we celebrated Juniper's 1st Gotcha Day! From a feeder rat to living the good life, Juniper has it made! 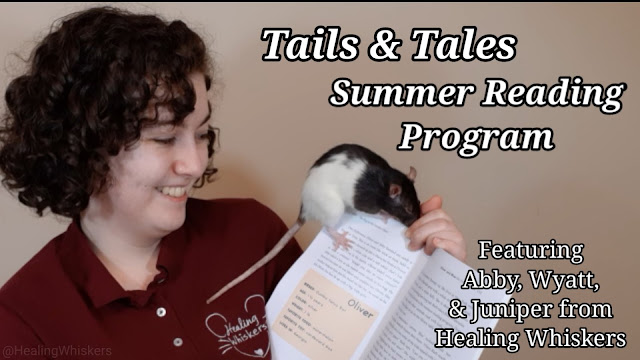 In late June, our last library video was published. This was for their virtual summer reading program, Tails and Tales. This video is similar to the adult one, but I tried to explain things a bit simpler and we read Oliver's chapter from The Dog in The Dentist Chair by Peggy Frezon.

In July, I announced that I was going back to college in the fall. I'm very excited as I withdrew around 10 years ago due to debilitating migraines. I'm going back for a business degree and hopefully marketing after that. We will see where this new adventure takes us!
How do you like our little twin rescue family?
Let us know in the comments!
at 12:00 AM
Labels: Events, Updates