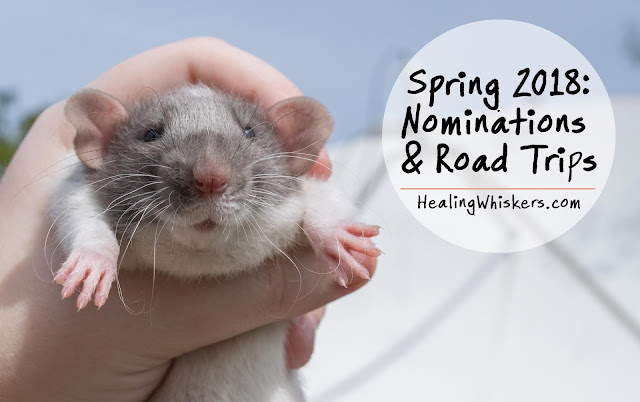 We have had a very productive Spring! Get comfortable because this is going to be a long post...

Color for a Cause

On the 15th, only a few days after Jasper and Oliver passed, we had an event at our local mall called Color for a Cause. This is where volunteer groups from the community each color a large mural in just two hours. 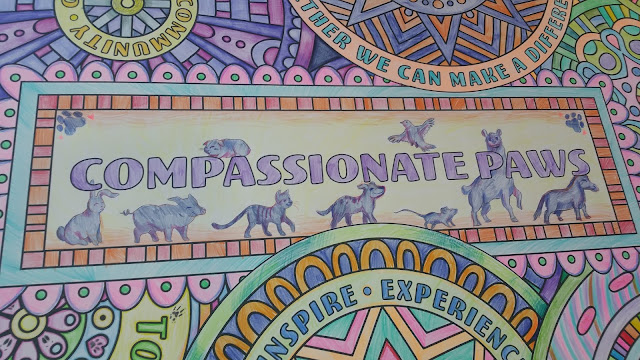 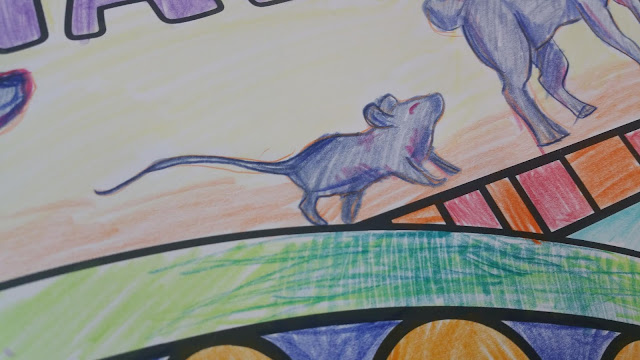 Thankfully, we had a good amount of people with us and I even brought my younger sister with me who brought in her skills and doodled all nine of the approved Pet Partners animals in the middle! 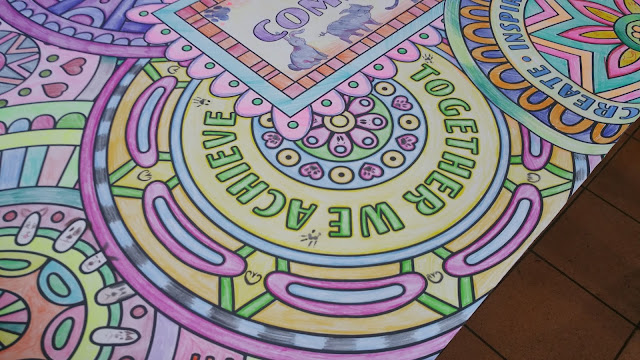 I did some animal prints in the circle I completed and the whole mural turned out really awesome. The judge really liked the creativity and we ended up winning $250 for Compassionate Paws! 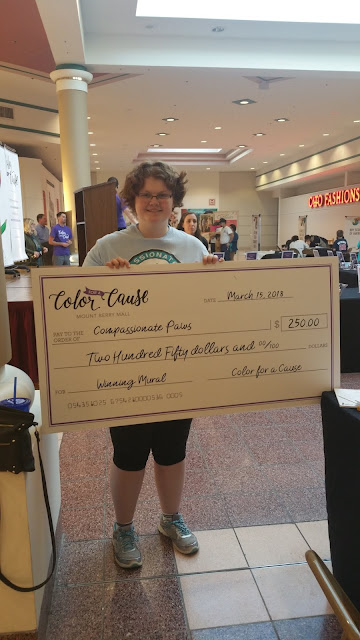 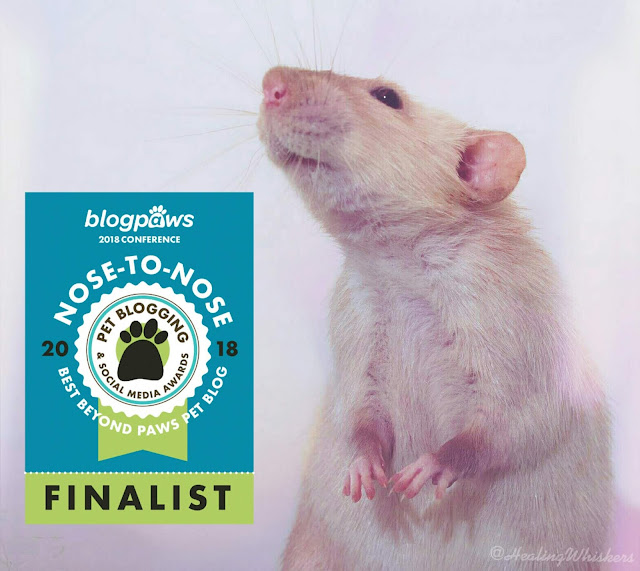 We were nominated as a Finalist in BlogPaws' pet blogging awards! We were also nominated last year in the same category (Unconventional Pet Blog). Thank you to everyone who put in a nomination for Healing Whiskers and congrats to the fellow nominees!

COVA of Rome Georgia - Volunteer of the Year Nomination 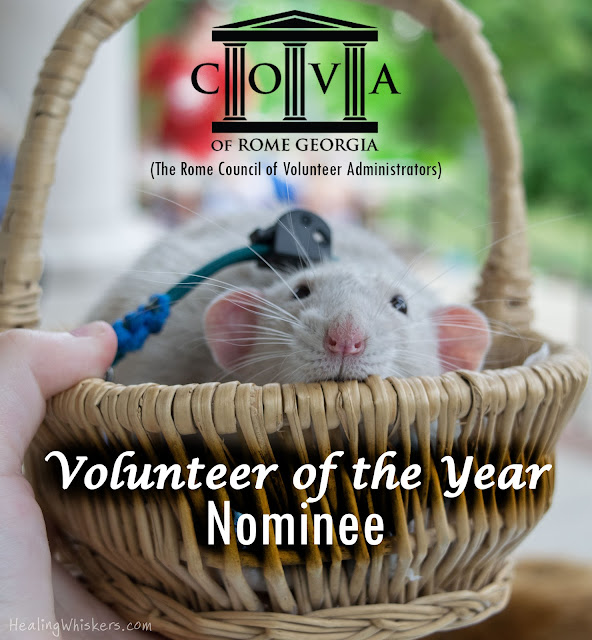 It was such a surprise that Oliver and I were nominated by Compassionate Paws to be COVA's Volunteer of the Year! We couldn't be there in person for the COVA luncheon because of us being on the road to BlogPaws. Oliver and I didn't win, but it was such an honor to be nominated!

On the 26th of March, I drove three hours to Cleveland, Georgia to a small pet shop called GHC Exotics to pick up two new babies and prospective therapy rats. I would have gotten rats from Jasper and Oliver's breeder, but sadly she isn't breeding anymore. GHC Exotics is known for their wide range of colors and they seem to be quite popular. 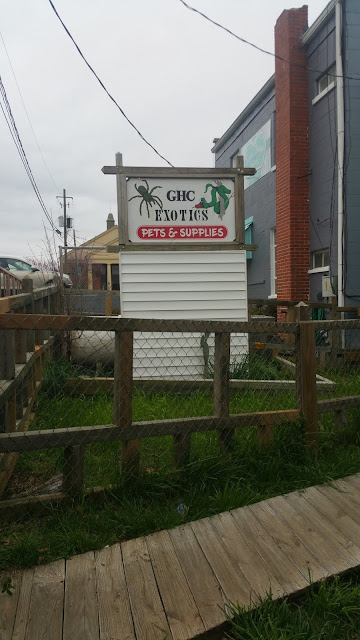 I had been chatting with them for a little while and fell in love with a little silver mane rex dumbo boy. He looked like a little lamb! They also had a silver mane Berkshire boy that was very cute as well. 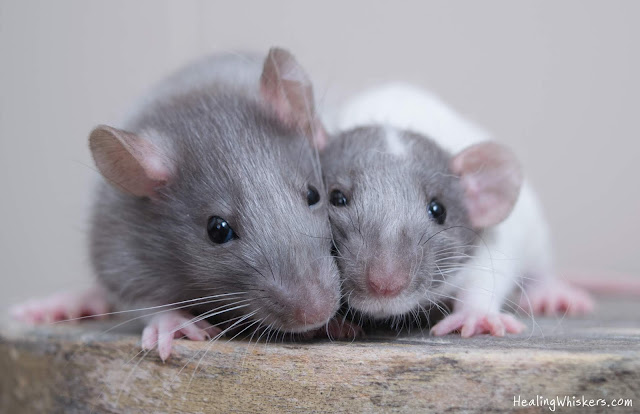 Xavier is a very adventurous and curious rat. Definitely very brave! Vincent is shy, bashful, and loves to curl up in my hair. I knew what their personalities were as soon as I picked them up and played with them for just a few minutes. They are completely different, but they both have the same motivations - food and people. 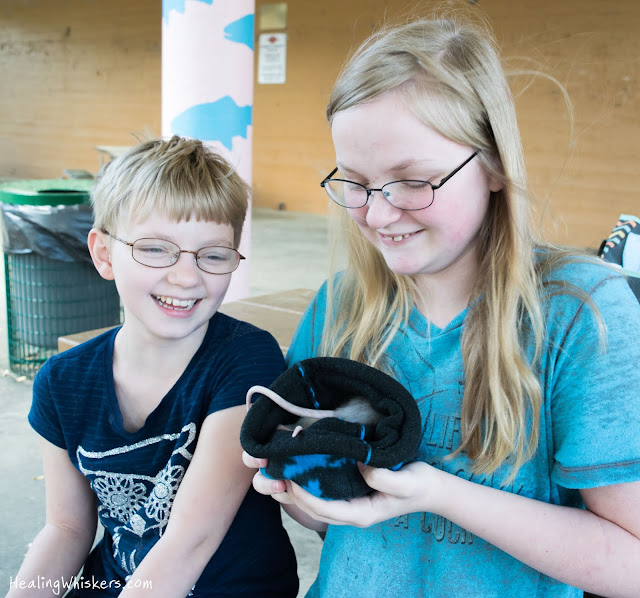 One of our friends wanted to meet the new boys so we met up at the park! We actually became friends after she met Oliver at an event last year. Her daughters love rats as well and I was happy to see how Xavier and Vincent would react. 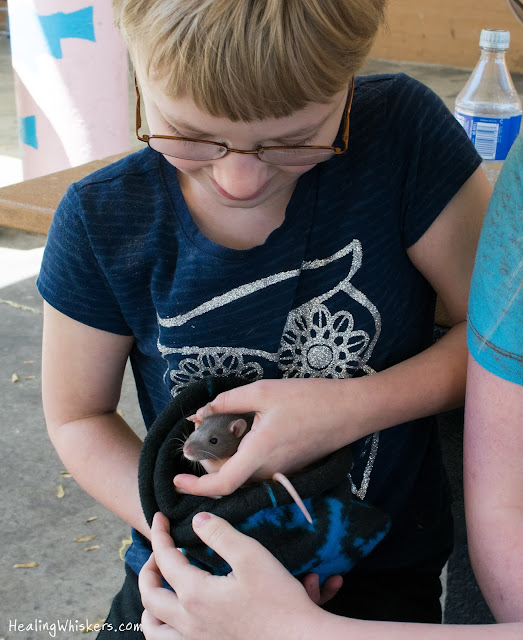 I had been using my handmade snuggle sack as a place of comfort during their transition, so I brought that along and they were just fine. The girls enjoyed learning more about rats and it is quite a treat to see young rats since they grow up so fast.

Last year we had great success with "I Pet a Therapy Rat!" buttons at the BlogPaws Conference. I wanted another design since I would not have an official therapy with me. My sister and I came up with an awesome paw print button that did very well at the conference! 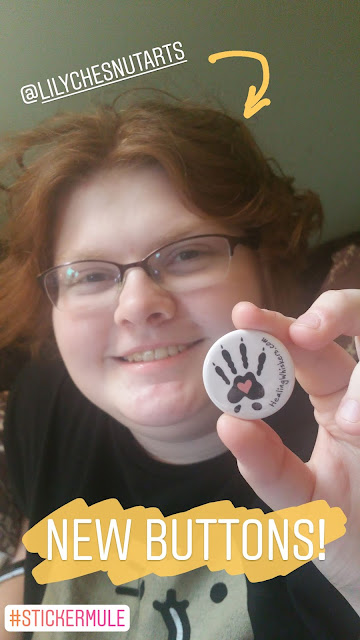 In an attempt to get the word out, I sent out press releases of both our COVA and BlogPaws nominations. I got an email back from a news station down in Columbus, Georgia called WLTZ who wanted to interview us on their Facebook Live show.


I wasn't sure what to expect, but it was very fun and I feel like I did a pretty darn good job explaining what we do. 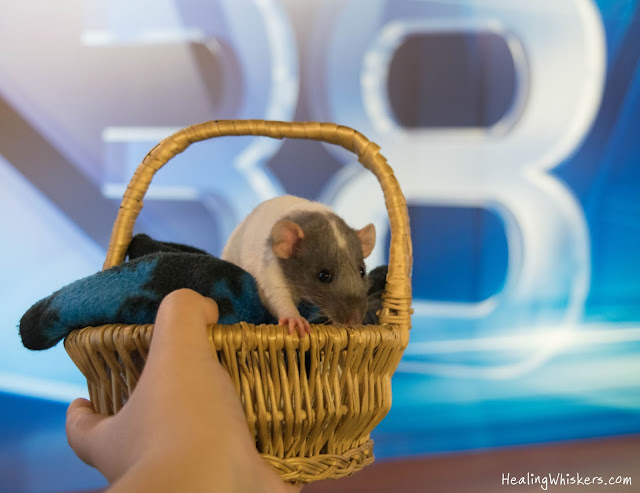 You can see when it comes to basket training, that I moved their snuggle sack into the basket and in the future, I would phase the sack out. Everyone needs a security blanket. 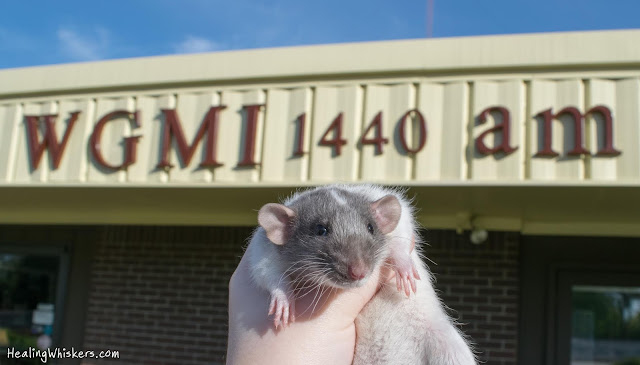 We received one more response to our mass press release - a radio station in Bremen! 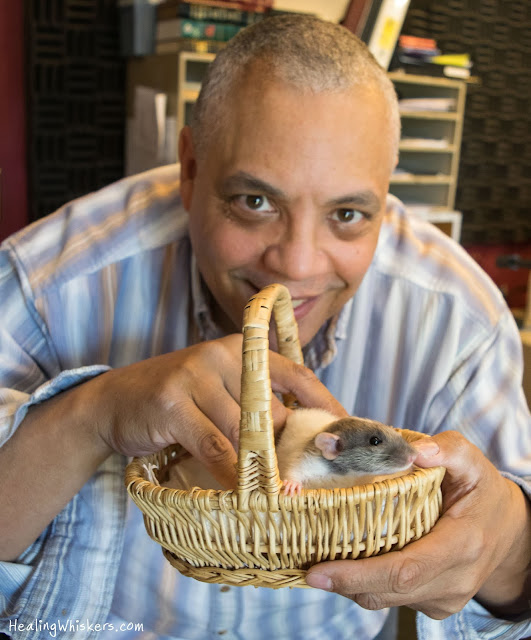 My dad came along with me for support so you hear him as well as me and our host, Jerry Segal.

The interview went really well and Jerry loved the boys!


We went from Georgia to Missouri to attend the 10th Annual BlogPaws Conference in Kansas City! This was our 4th conference and I've been bringing rats ever since. 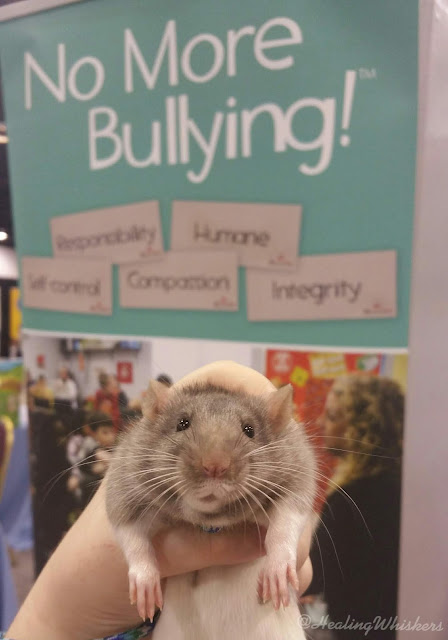 Our set up was pretty interesting, and we kind of just went full out as if we were at a therapy event. I had my dog stroller with my pup Jada in it with one of the rats behind her in a carrier. On top of the stroller near the handle, I had the basket with the other rat wearing a harness. This way I could work with one rat at a time and let the other rest. 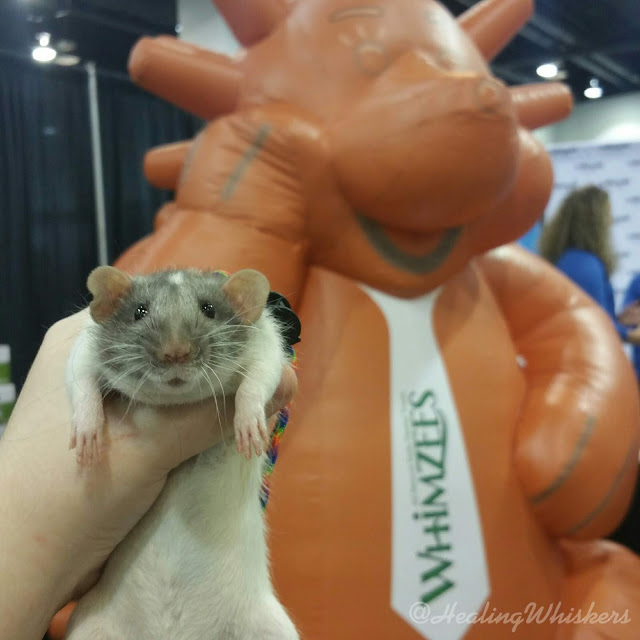 They both did very well considering it was their first big event! 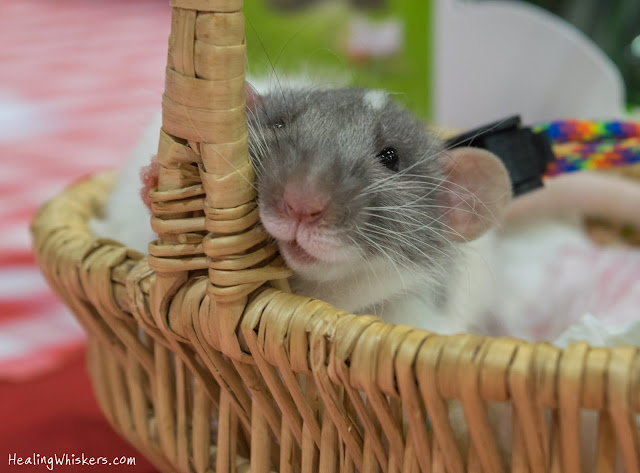 We didn't win the award for Best Beyond Paws Pet Blog, but it was such an honor to be nominated! Plus we looked super spiffy on the red carpet. Yes, I made rat bowties! 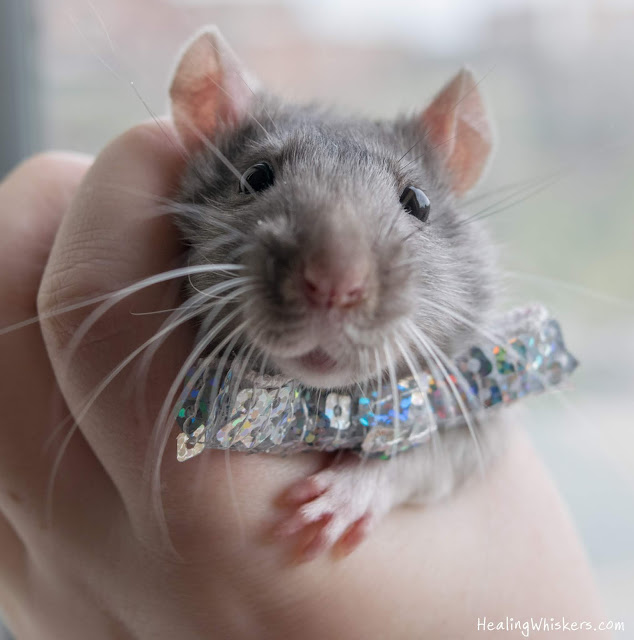 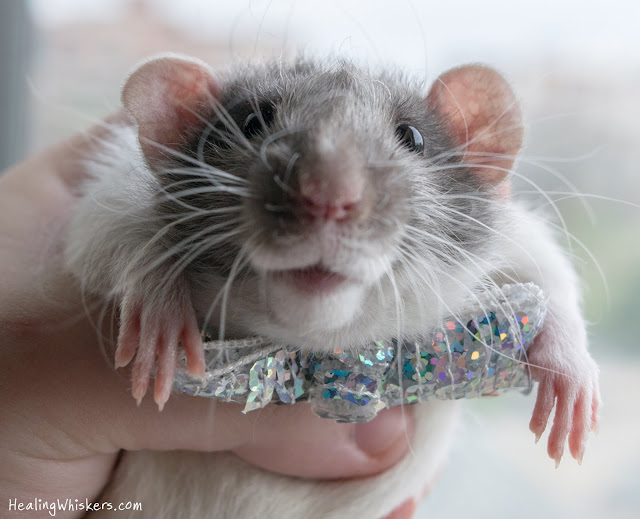 It's a Rat's World Magazine - Rat of The Month 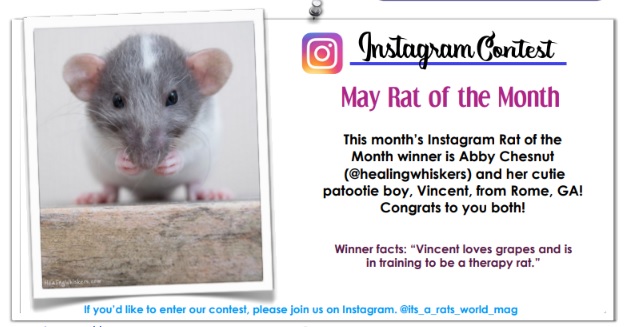 We entered It's a Rat's World Magazine's monthly photo contest over on Instagram and we ended up winning! Honestly could not have done it without yall's support! Be sure to keep an eye on IARW because they have an article coming out soon which will be all about Healing Whiskers! 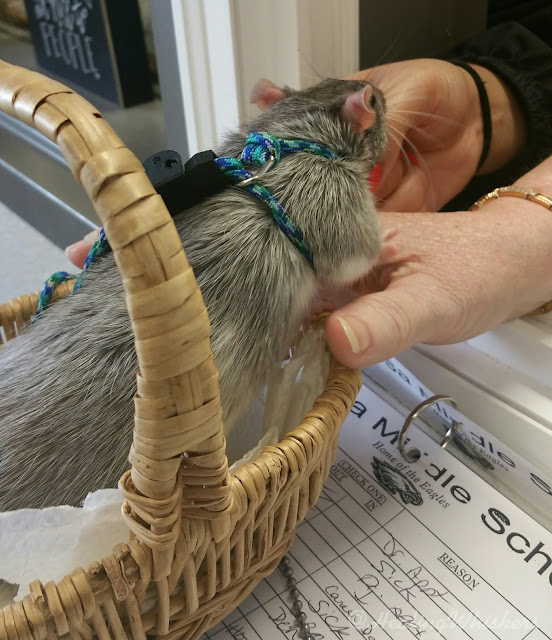 Even though we aren't an official team yet, Xavier and I were able to visit Coosa Middle School for Career Day. Our friend Cathy Varidel has a Rottweiler named Sparrow who is a service dog who also does therapy work. She talked about service and therapy animals and I followed up with information about therapy rats.

Students rotated in the classroom every 15 minutes for 2 hours so we were definitely tired by the end! I think the best reactions we had were from the ladies at the front desk. They loved meeting Xavier! 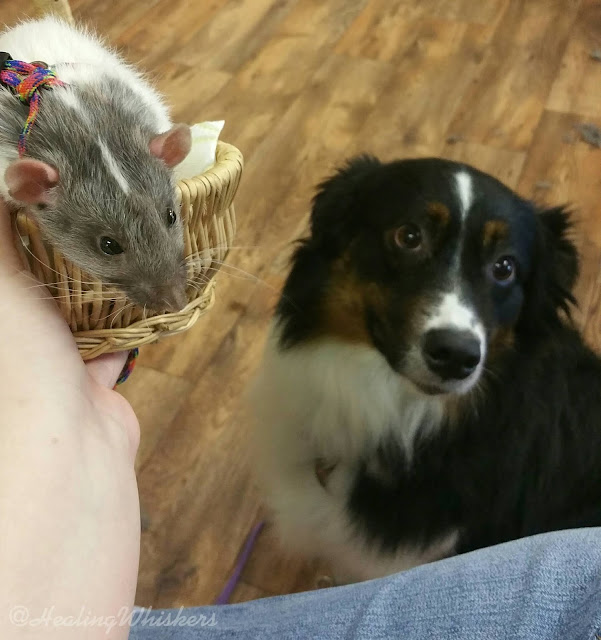 Right after BlogPaws, I started working as a dog bather at a place called Diggin' It! Vincent came by and visited one day and really enjoyed it! 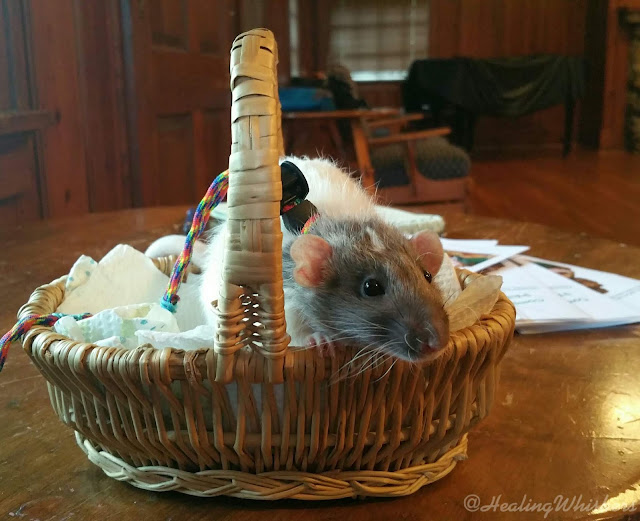 We had a meet and greet for people interested in doing therapy work with their animals over in Cedartown, Georgia. Vincent came along and we worked on him staying in his basket and introduced him to the towel for future rat burritos. I placed him on a table and he just stayed there in his basket which is just what I wanted to see. He wasn't nervous, just pretty chill. Still have to work on the towel so people can hold him in the future. Ideally, I would have introduced him to the towel earlier. 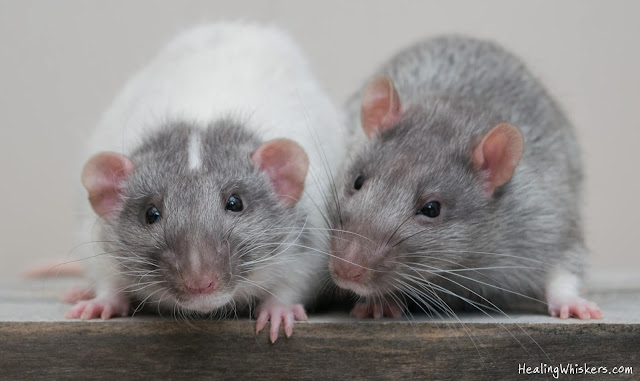 Vincent and Xavier are at 4 months now, so we have to wait until they are 6 months to take the Pet Partners Therapy Animal Test. Still figuring if I should just do therapy work with just Vincent and something else with Xavier since he is a little grabby. We will see!

What do you think of Vincent and Xavier?
Let us know in the comments below!
at 2:20 PM
Labels: Events, Updates