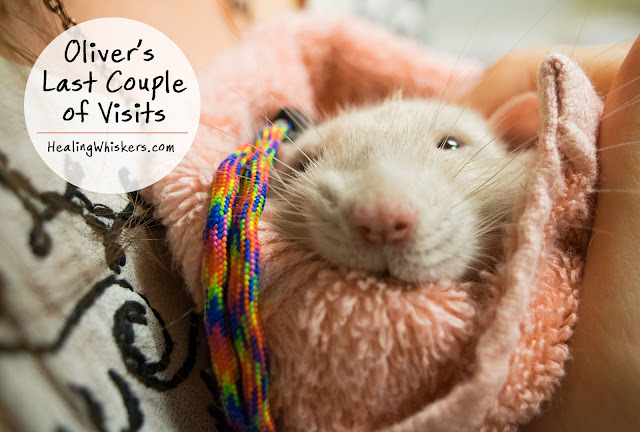 Let's see, the last visit we talked about was back in October! Let's celebrate the rest of Oliver's work by sharing photos since our November visits. 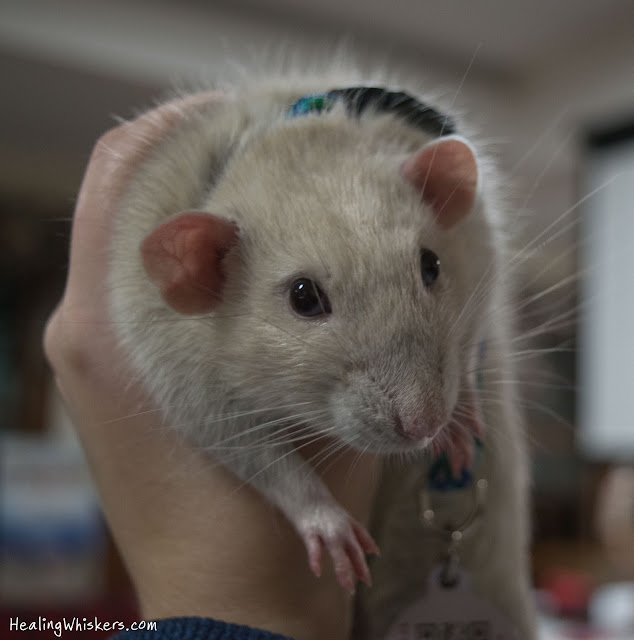 This was a fun little event where another handler and myself talked about our specific animals as well as about therapy animals. I thought it was really interesting because the other handler had a Bull Mastiff. It was big and small! There were some really good questions by the cub scouts who came up to me afterward. Apparently, I need to learn how fast rats can run because I've been asked that multiple times now, haha! 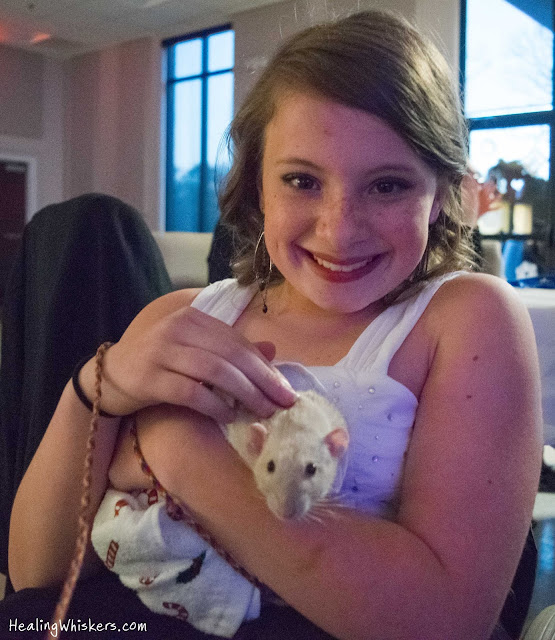 Ah, we had so much fun at the Snowflake Ball at North Pleasant Valley Baptist Church! This is a prom-like event for adults with special needs. This was my first time attending so I didn't know what to expect. 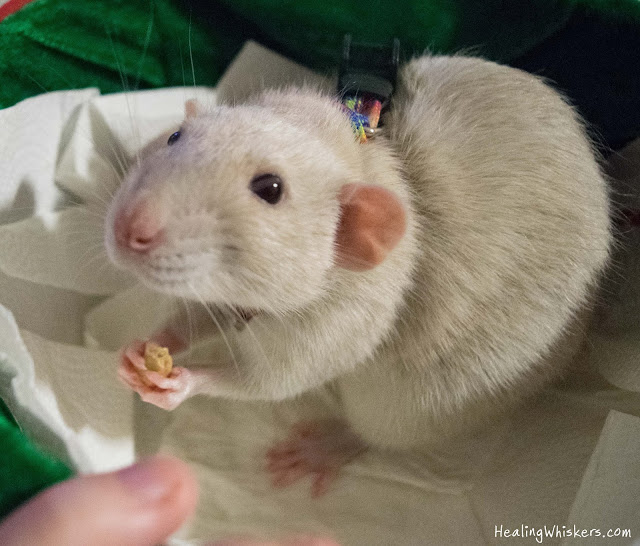 It was a huge party! Lots of loud music and people dancing. The music was loud even for me, but Oliver didn't give me any signs that he was wanting to go home or anything. He also enjoyed all the yummy food! 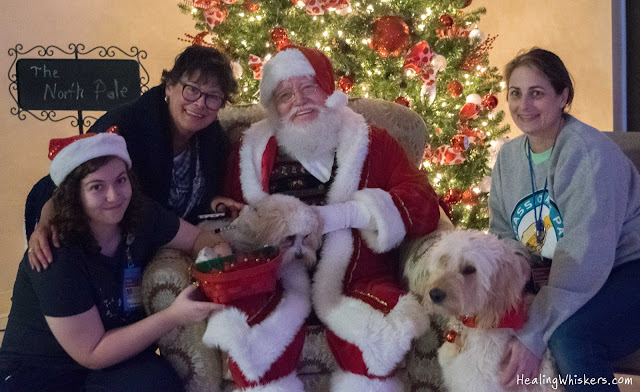 We also got to meet Santa with our fellow volunteers! Can you spot Oliver? 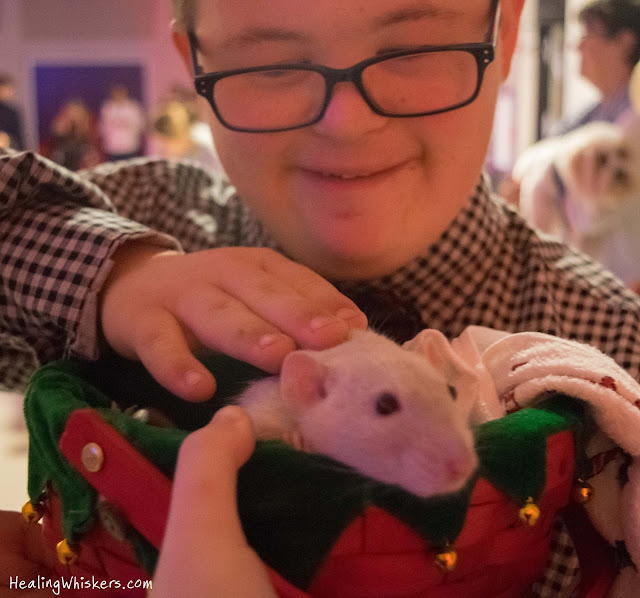 We had a very special encounter with a young man with down syndrome. He was so gentle and after almost every song he would come over and pet Oliver. He also made sure every girl he danced with had an "I Pet a Therapy Rat!" button. It was really adorable! 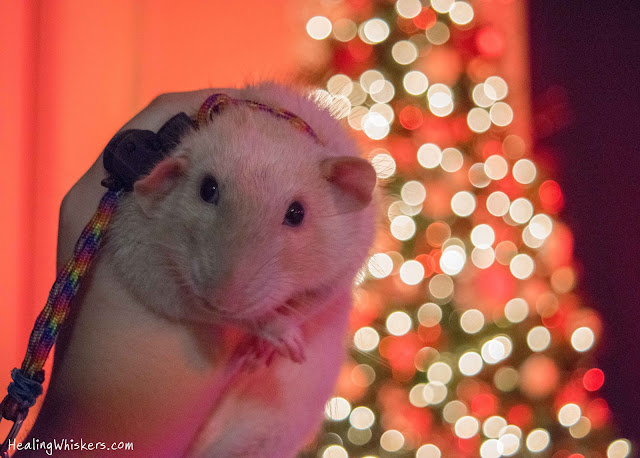 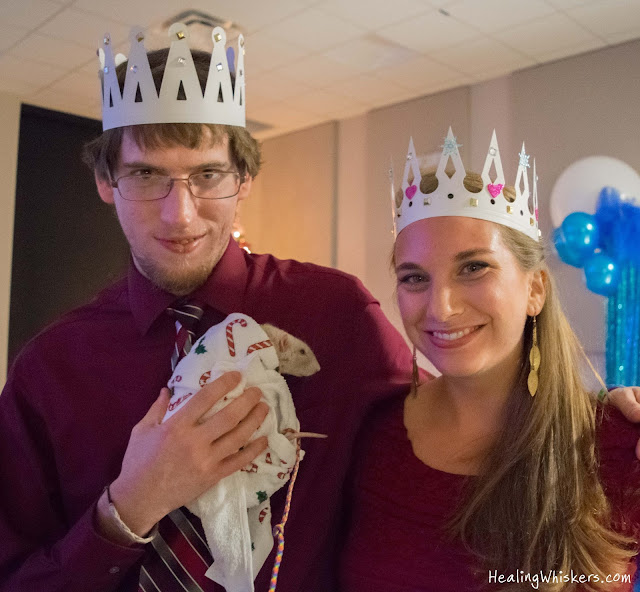 There were lots of arts and crafts to take part in. We roamed around a little but stayed in one area mostly. 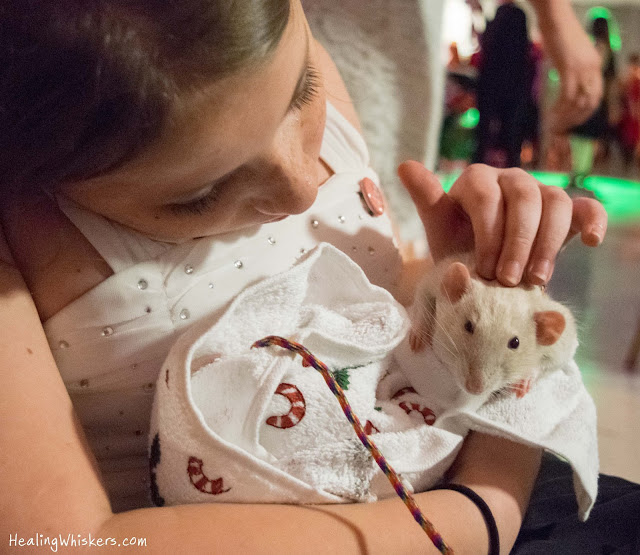 We had another special moment with a lady in a wheelchair (and man could she dance!). She was smitten with Oliver and I could say the same about him. 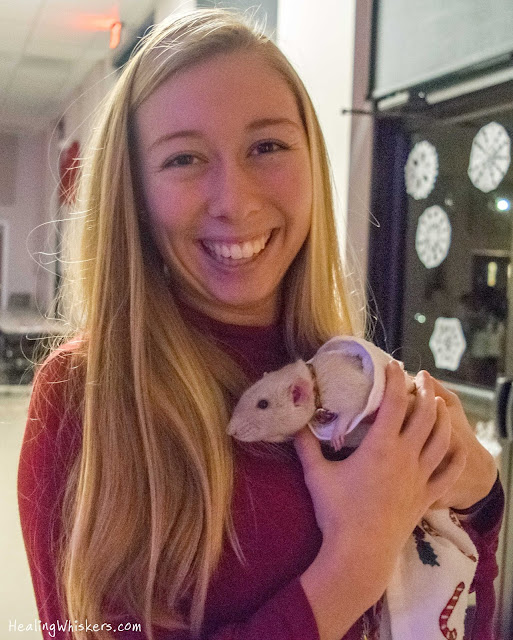 Overall we had a blast and can't wait until next year!

I didn't really have any official pictures since I think I accidentally left my camera at home, but you can check out our Facebook page for the few we took!

No photos on this one, but we met new potential Pet Partners and gave them tips and tricks. I also learned that a library in Summerville, Georgia was looking for a Read with Me handler team. This had been something I wanted to get into, but a local school wasn't into a reading rat, so I jumped on it and said: "if they are cool with a rat I'm in!". 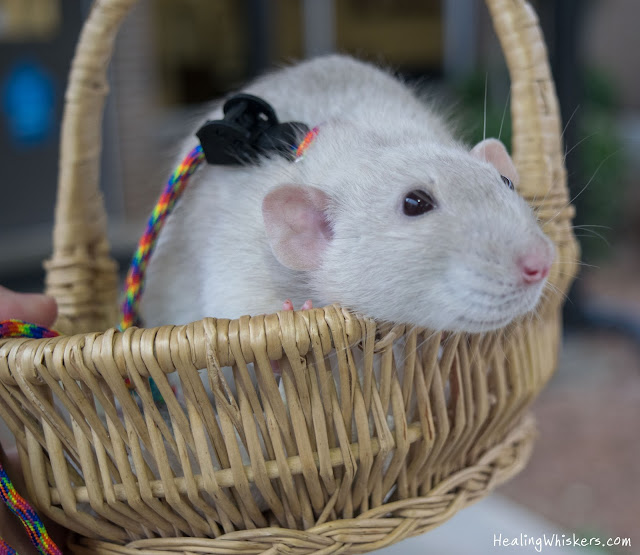 I went into this not knowing this was a meet and greet with special education students. It's okay though, Oliver is okay with all kinds of situations and I just roll with it. It was really fun and another handler and myself both had groups of kids that were alternated.

To my surprise and delight, the young man we met at the Snowflake Ball was in the class! He immediately recognized Oliver and it was just so heartwarming. There was another young lady with Down syndrome who really enjoyed Oliver as well. She wasn't too thrilled with dogs, so I'm glad we were there to bring some variety.

It seems Oliver had a connection with individuals with down syndrome. While I was still thinking about the possible connection, another student said if she had a rat she would name him Pat. Later on, I decided Pat the Rat would be the name of the main character if we would do a children's book. Something else to add to my never-ending to-do list. :) 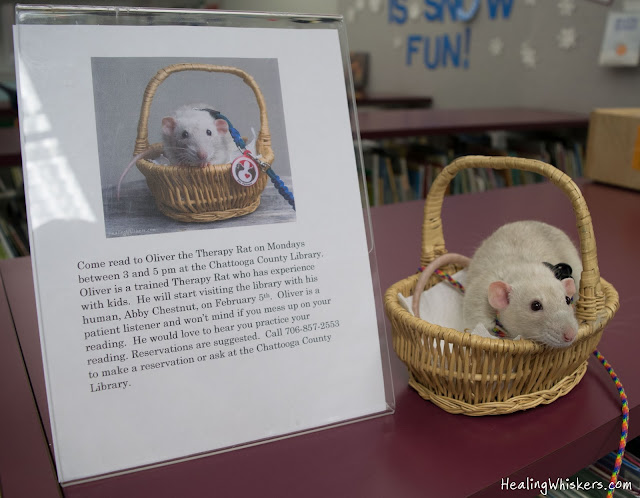 Yes! The library gave us the A-OK to be their Read with Me team! I was told that the director of the children's program wasn't sure about having a rat, but her daughter had met Oliver at a previous college event. How cool is that?! 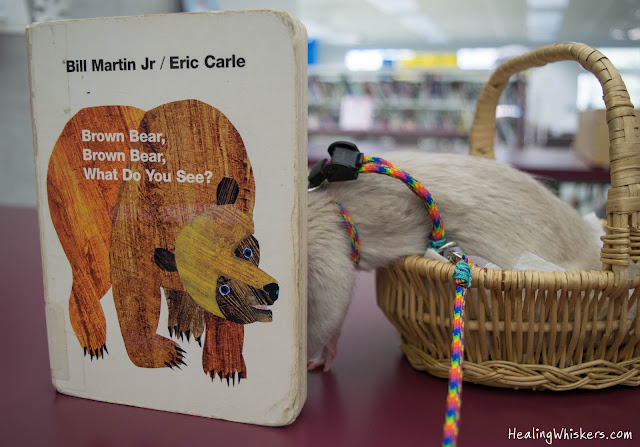 Our first day we had a very excited young girl who read some of a chapter book to us. The whole point of this program is to get kids to read and be confident about it. When you are a kid with low self-esteem and an adult is always correcting your reading it can get frustrating. These moments where they read to the animals gives them a chance to feel like they are doing the right thing. Now, this girl did struggle with some words and when she was obviously asking for guidance I told her the word and then assured her that if she has any questions on a word to feel free to ask.

Oh, it was hard to let her read some words wrong, but to hear her become more confident as she progressed through the book was wonderful.

Oliver was starting to get the sniffles and I was being extremely careful since the flu was rampant (hey, guess what happened to me the next week!), but overall he did pretty well. He decided to groom one of the girl's fingers a bit (like nibble off some dead skin). That was a tad embarrassing, but the girl understood it wasn't a bite and laughed it off. So during the visit, I was sitting down with the girl, and Oliver was either in my basket or in his rat burrito towel. Because we were sitting down he was a little confused, plus there are more smells at ground level. So he was a bit fidgety, but nothing that time and training couldn't help.

We didn't have any more kids that day but stayed in the kids area just in case. 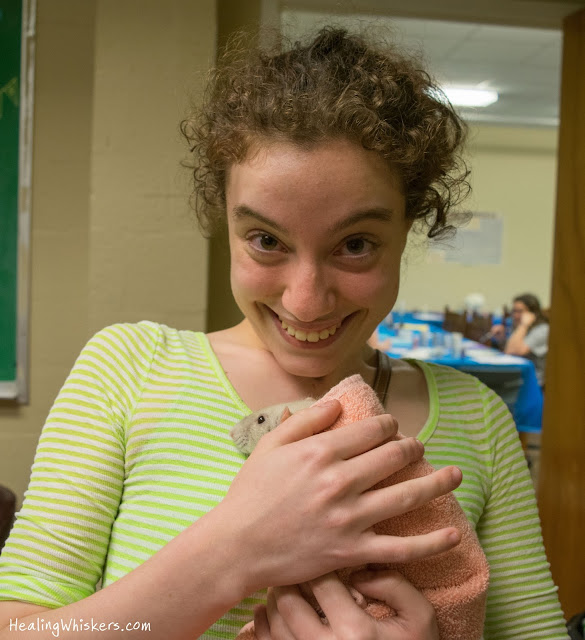 I'm so glad Oliver was able to go to Berry in his final weeks. Berry was his favorite place and he got to see some familiar faces! 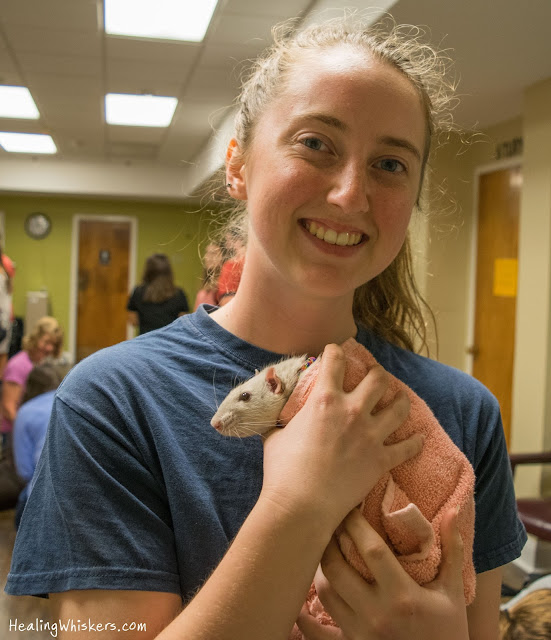 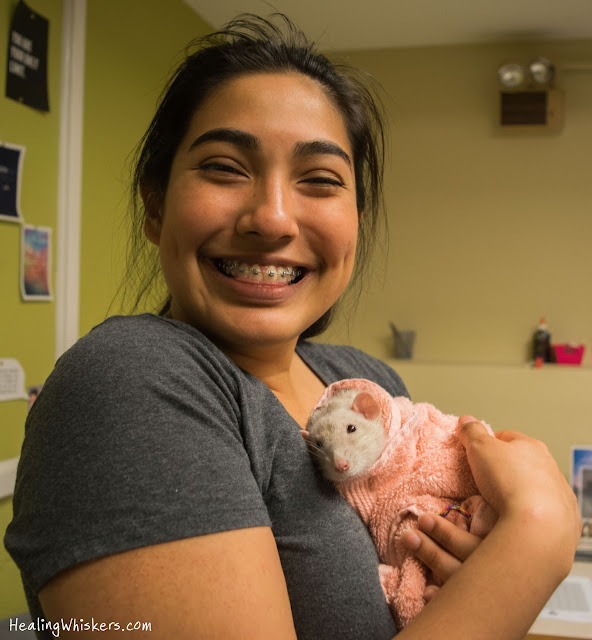 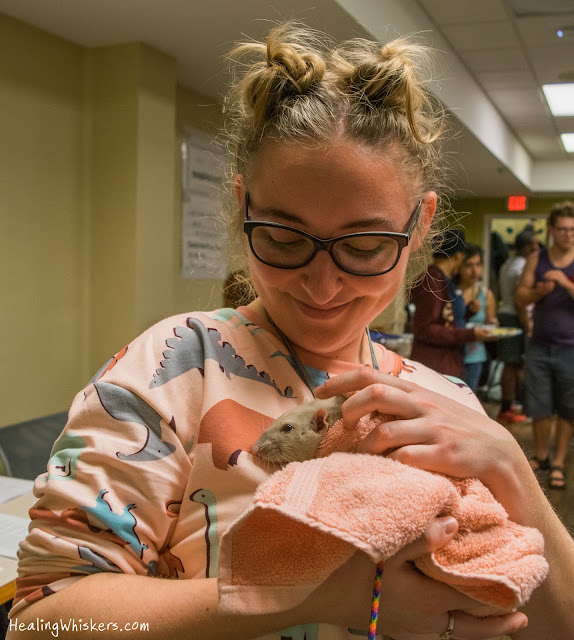 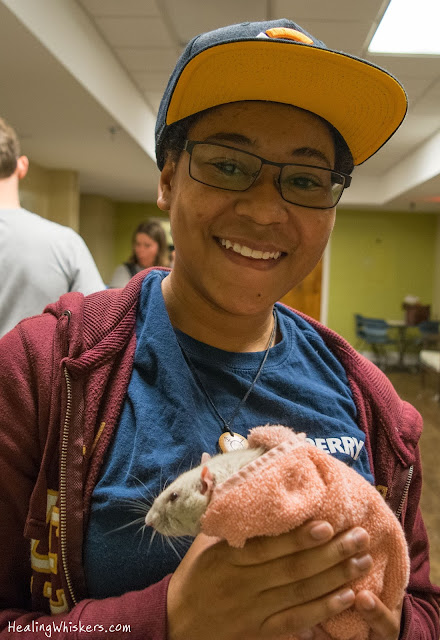 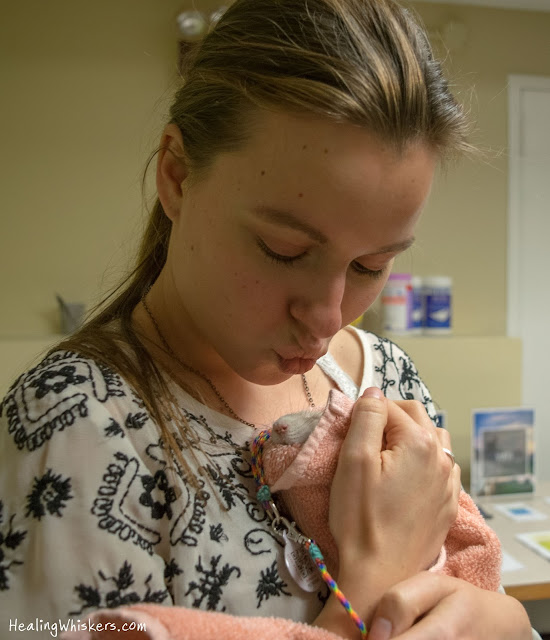 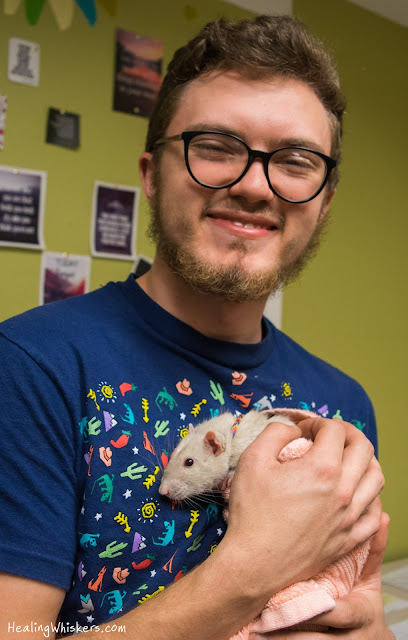 The cutest moment was when his little buddy Wyatt came over to visit. We have a video below of the adorableness! 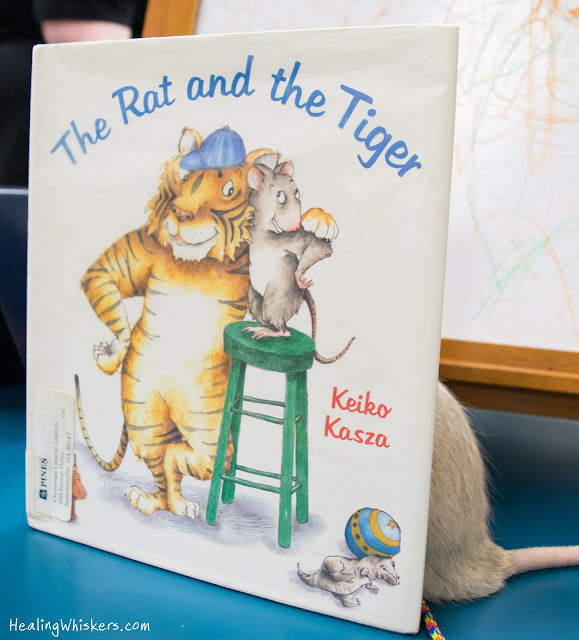 This was a little event to meet more potential pet partners in the Summerville area. We had a couple of people and helped them with any questions they had. Afterward, we asked the helpful library staff if they could help us find kid's books with rats in them for a little photoshoot! 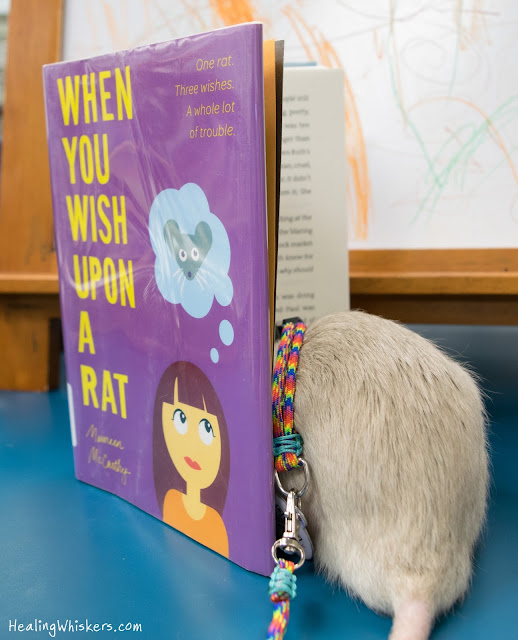 We had one last Read with Me event. Oliver did so well and we had a repeat visitor from last time and one new girl. We also educated a parent about rats and therapy animals and she was blown away by rats even being pets. So that was awesome that we were able to educate someone.

Overall, Oliver had a wonderful time working. He loved every single one of you. I'm so happy he had a fulfilling life, traveled across the country, and met so many people whom he often made smile.

Thank you all for being his friend!

Did you meet Oliver?
Let us know in the comments!
at 8:12 PM
Labels: Events