A Fair Amount of Finals and Other Events 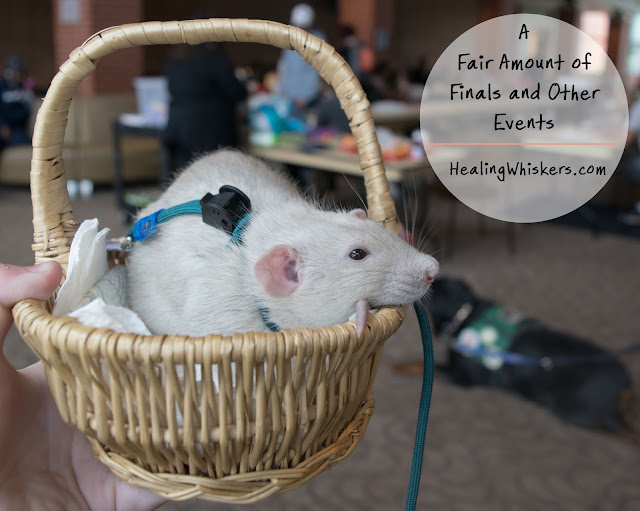 Let's see, April and May have been very busy for little ol' Oliver. We've had 6 therapy events totaling a little over 10 hours! Most were de-stressing at colleges for students, but we had some great public events as well. 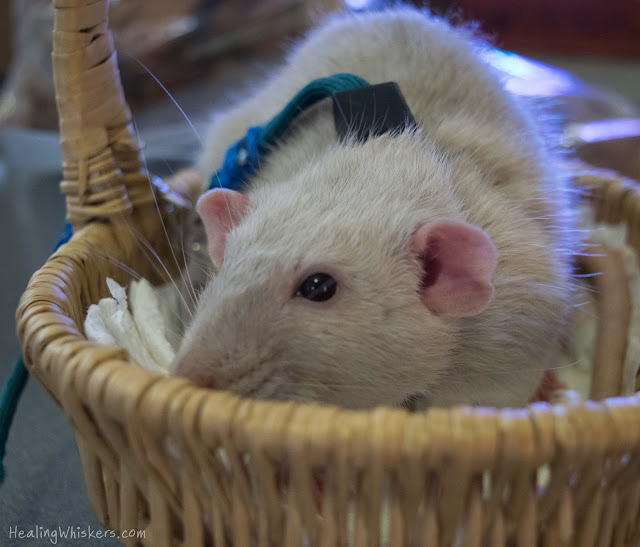 So this was an interesting event! We were supposed to be there after the walk, but I believe the walk ended a bit earlier than expected so we got there just as people were about the leave. But, for those 15 minutes we were there we were a hit, and I was on my toes the whole time. There were a lot of younger kids and because this was for an autism walk, most likely they were also on the spectrum. Autism or not, you gotta be careful with kids!

At one point I had 6 kids around me asking questions and taking turns to pet Oliver. I did have some issues with grabbing, but Oliver took it like a champ and I did my best to show how to pet him correctly.

I am so proud of Oliver as he didn't squeak or show any discomfort. Rats are hardy animals, but can be sensitive (I used to have a rat named Everett who would squeal like a pig when I held him and would squeak when I touched him). And also in that kind of situation what is preventing him from biting the kid? Nothing really. But it isn't in his temperament. Granted, he did grab the nail clippers out of my hand and gave them a couple of angry (and very light) small noms...but he didn't nom me. Polite little guy.


I did have the cutest kids come up to me though. I'll share some of the conversations:

Girl: -petting Oliver and then looks up at me- I found a snake skin once!
Me: Oh cool!
Girl: Yeah I love snakes and finding snake skins! -continues to pet-


Boy: What's his name? -Pets Oliver-
Me: Oliver
Boy: Can he run fast?
Me: Uhh -tries to remember a time in which Oliver ran fast- I mean, I guess he can
Boy: Can he run faster than a cat?
Me: Sure! (I really hope so)
Boy: Cool! -runs off-
-a few minutes later he comes back with his family-
Boy: This is Oliver and he can run faster than a cat!
Me: -dies internally from too much cute- 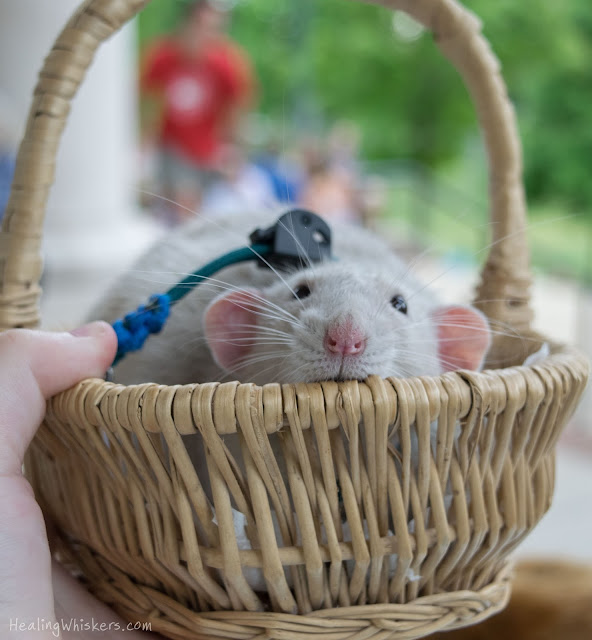 Being a Berry Alumni (well..kinda..I never graduated), it is always fun to come to Berry. They had a huge event called Finals Fest with tons of food, music, and of course, lots of fluffy animals to pet!

Seeing people's faces as they realize Oliver is actually real is priceless. By the end of these events, my cheeks hurt from smiling! 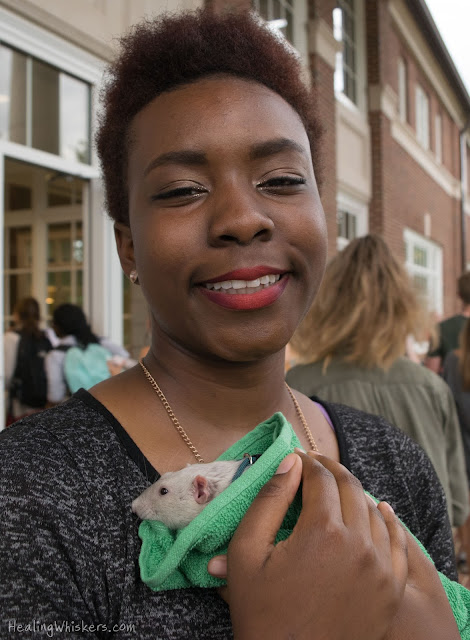 Oliver also made a few new fans! Love when we have people who repeatedly cuddle him. 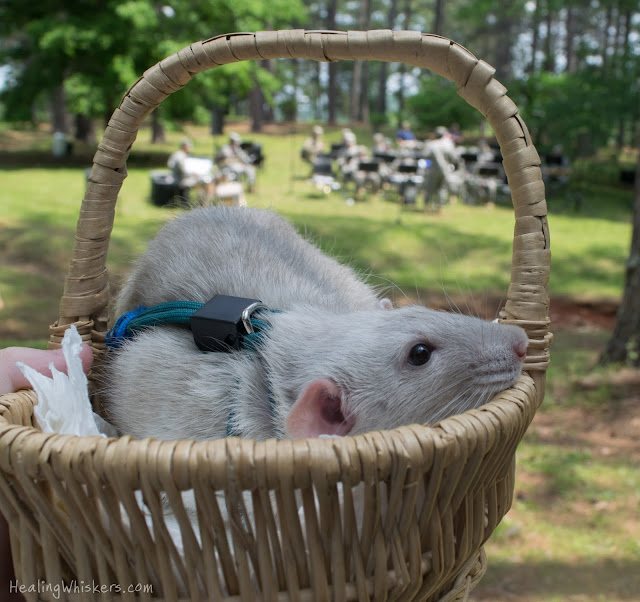 I wasn't sure about attending this event because I am not affiliated with the military in any way, but we had some up and coming military teens who enjoyed us being there and really liked Oliver.

Side note: asking a pair of firefighters if I could pose my rat against their firetruck is probably one of the strangest questions I've asked.

We chatted amongst the other booths and educated many about therapy rats and of course, rats in general. We also got some good swag, including a little baby brush that we can use for visits! 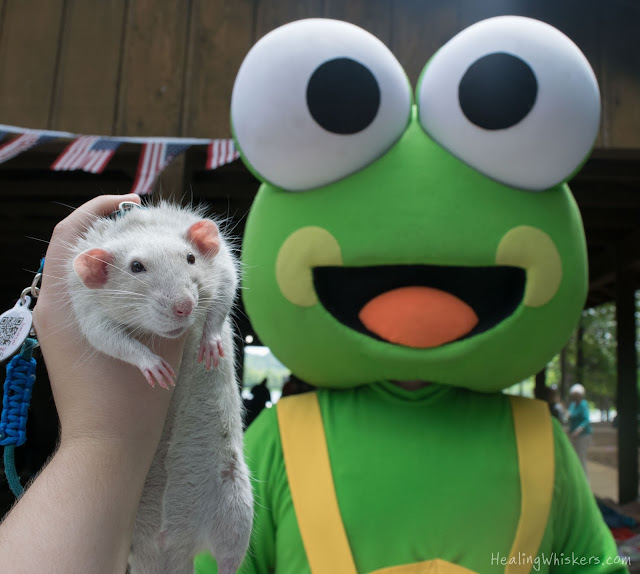 If you have been a fan of our blog for a while I am sure the above photo gave you a chuckle. (If not, read our blog post when we were training Jasper)


I was definitely excited to stop by Georgia Highlands as my boyfriend used to go to school and work there. He hyped up some of his friends to come and visit us and it was definitely a warm welcome!


We had student and his great dane service dog, Hercules show up and sit for a while. Oliver was like "sup". Didn't bat an eye...and of course if you have met us before I have a spiel where I tell people about how poor the eyesight of rats are. That nose is super powerful though! 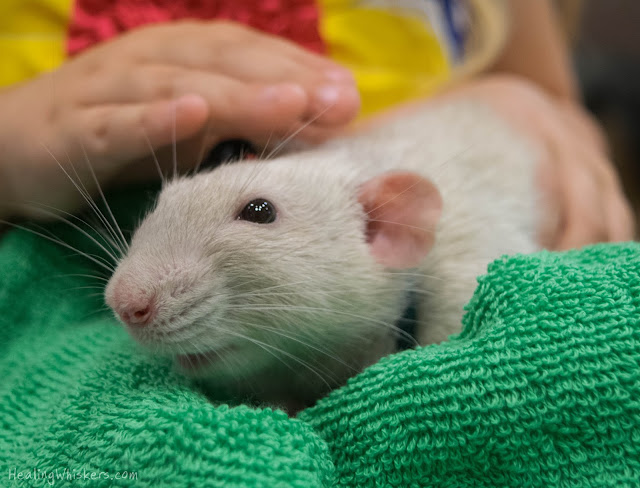 Yup, you read that right! We also went to Georgia Highland's Cartersville Campus! It is about a 45-minute drive from Rome and was definitely worth it. 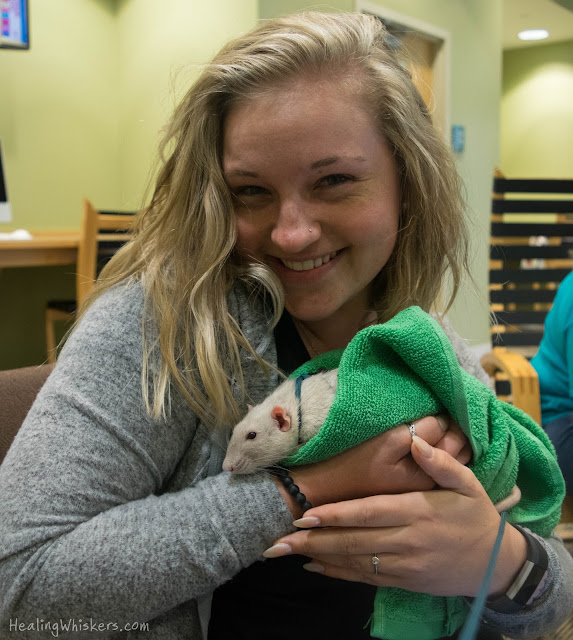 We had a good crowd, with many people wondering about Oliver and then falling in love with him. Lots of great questions were asked!

The best and most difficult part of this event was a preschooler. Now don't get me wrong, kids are great, but uh, this particular girl has some fine-tuned leadership skills.

I actually see this girl weekly (without Oliver) at a church event with her mom so they both were very excited to learn I was coming to the school. She LOVED Oliver's tail! I thought that was adorable since most adults and kids are scared of that one single part of a rat.

She also tried helping me and insisted on transferring him to one person to the next and holding his leash. But we have strict rules on that kind of stuff so I had to politely and firmly tell her no. She for sure gave us some good training and I do appreciate it! 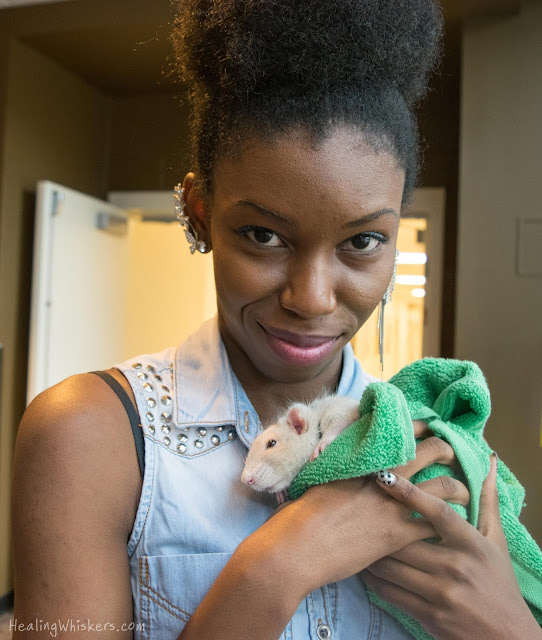 Yes, so we did three de-stress events in three days! This one was in Marrietta which is an hour and 20 minutes away from us. Wasn't a ton of people, but lots of great experiences!

My favorite was when a student came up and was obviously not very sure about Oliver (being a rat and all this happens frequently), but I could tell he wasn't completely against rats. Once he got up the courage to pet Oliver he was able to do anything. He gave him a treat and also eventually held him. It was great seeing someone step out of their comfort zone and be absolutely fascinated by Oliver at the same time!

That interaction got me thinking of making getting some stickers or pins that say "I pet a therapy rat!" or something similar. What do you think?

Stay tuned! We have one more therapy event this month and then we are heading out to BlogPaws! (post coming soon, right after this one!) Check out our short video for these events:

Would you enjoy have a sticker or pin after you pet Oliver?
Let us know in the comments below!
at 10:51 PM
Labels: Events